Wallpaper is a medium deeply rooted in the British taste and, to a degree, its psyche. Ask anyone you know to describe a vivid memory of childhood and they invariably refer to décor: more often than not a wallpaper.

Commercial installations have this same staying power. A wallpaper within a restaurant, bar or nightclub takes on a resonance of distinct clarity - evoking memories long after the band has stopped playing and the lights are turned off.

de Gournay wallpapers within locations of this kind become synonymous with the identity of the premises, but begin as fascinating proposals from designers and clients: who’s vision rarely fails to inspire.

Long an institution of London nightlife and the byword not only for ambient elegance but also illustrious guests, the reopening of Annabel’s nightclub in 2018 courtesy of Richard Caring and the Birley group was eagerly anticipated worldwide. ⁣Within a Georgian mansion on Berkeley Square, designer Martin Brudnizski was tasked to conjure an interior forever ‘fresh for the greatest party of the season’. His vivid execution certainly lived up to the premise and de Gournay were proud to supply hand painted wallpapers for three exceptional installations. 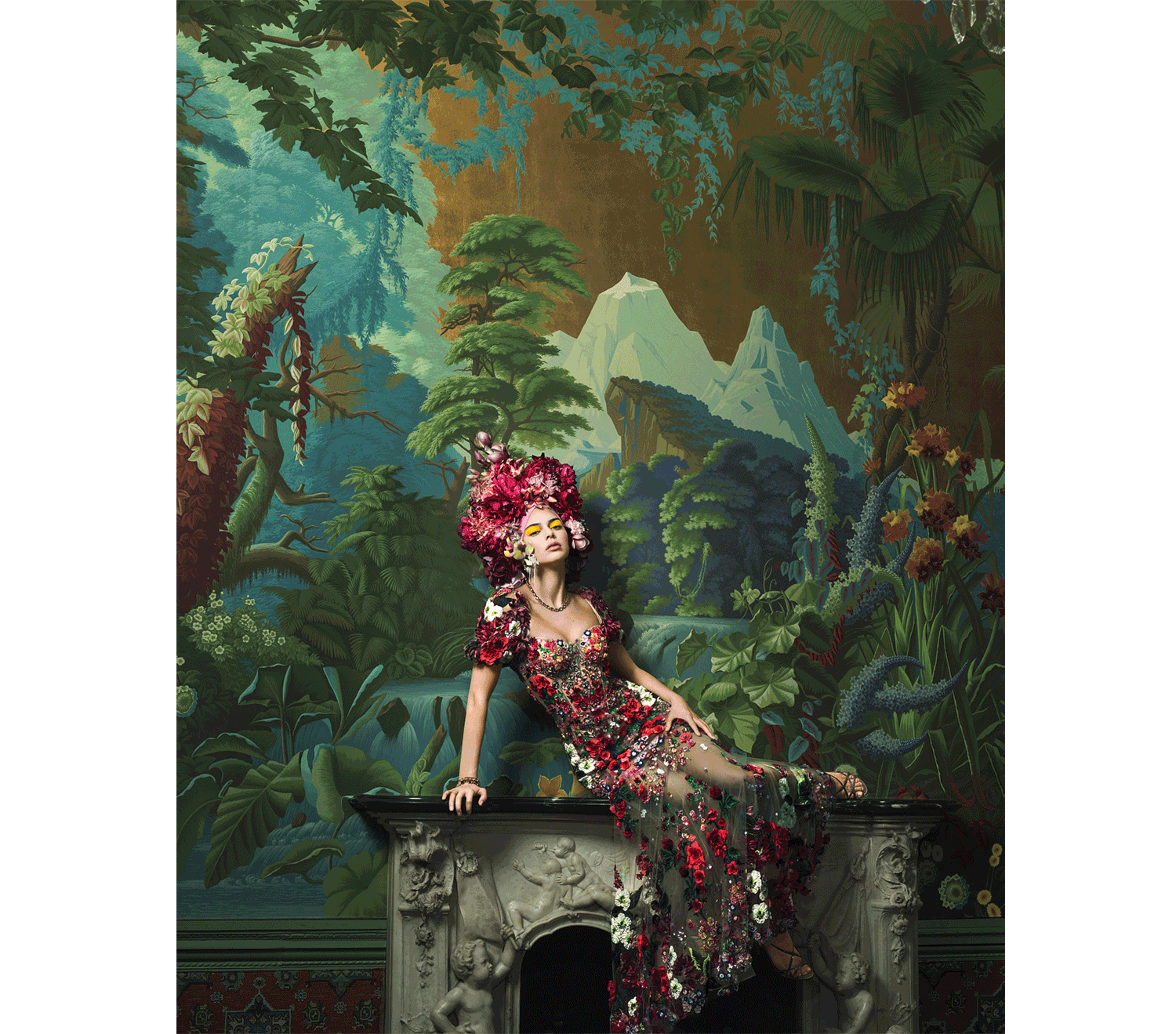 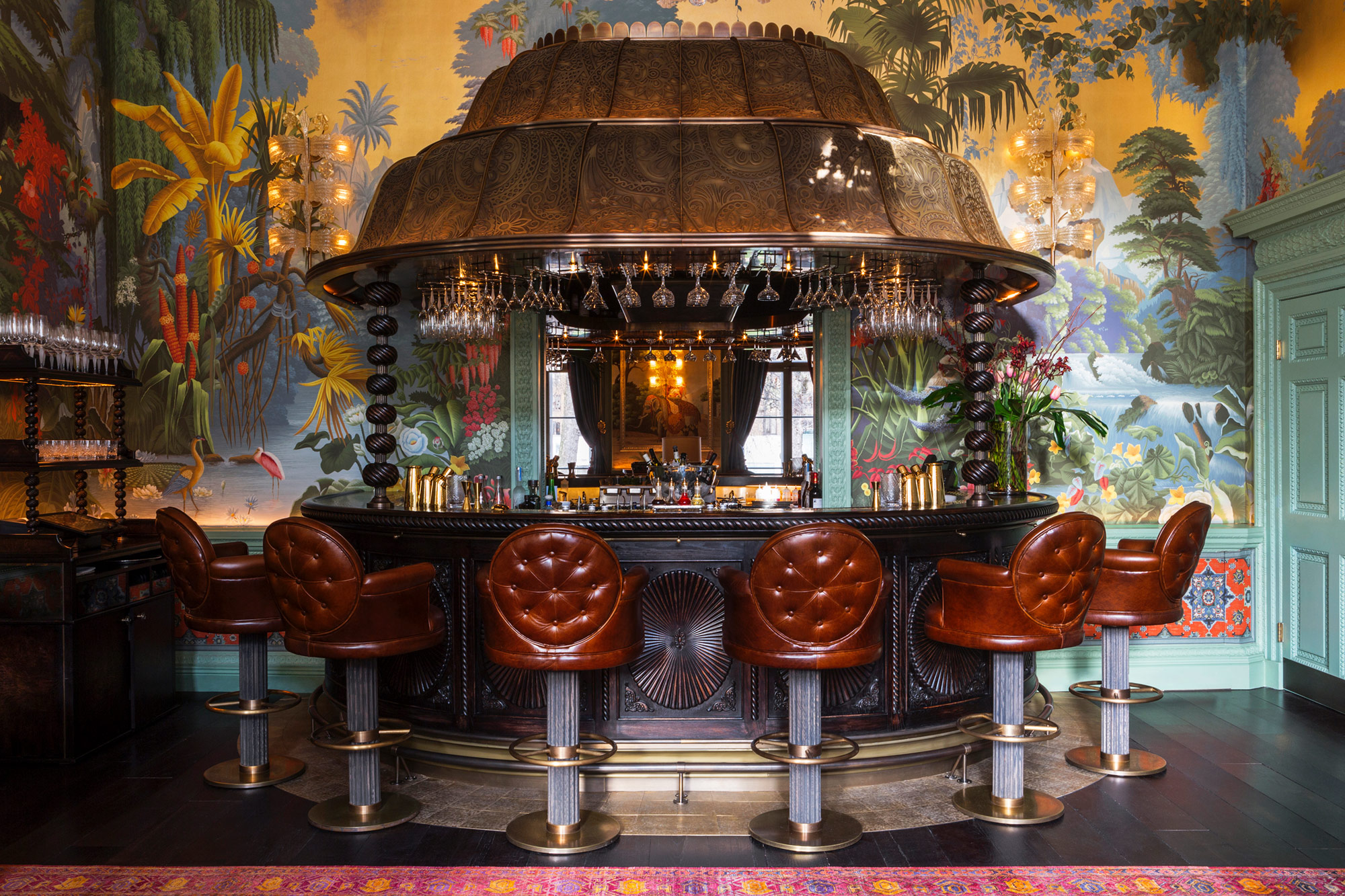 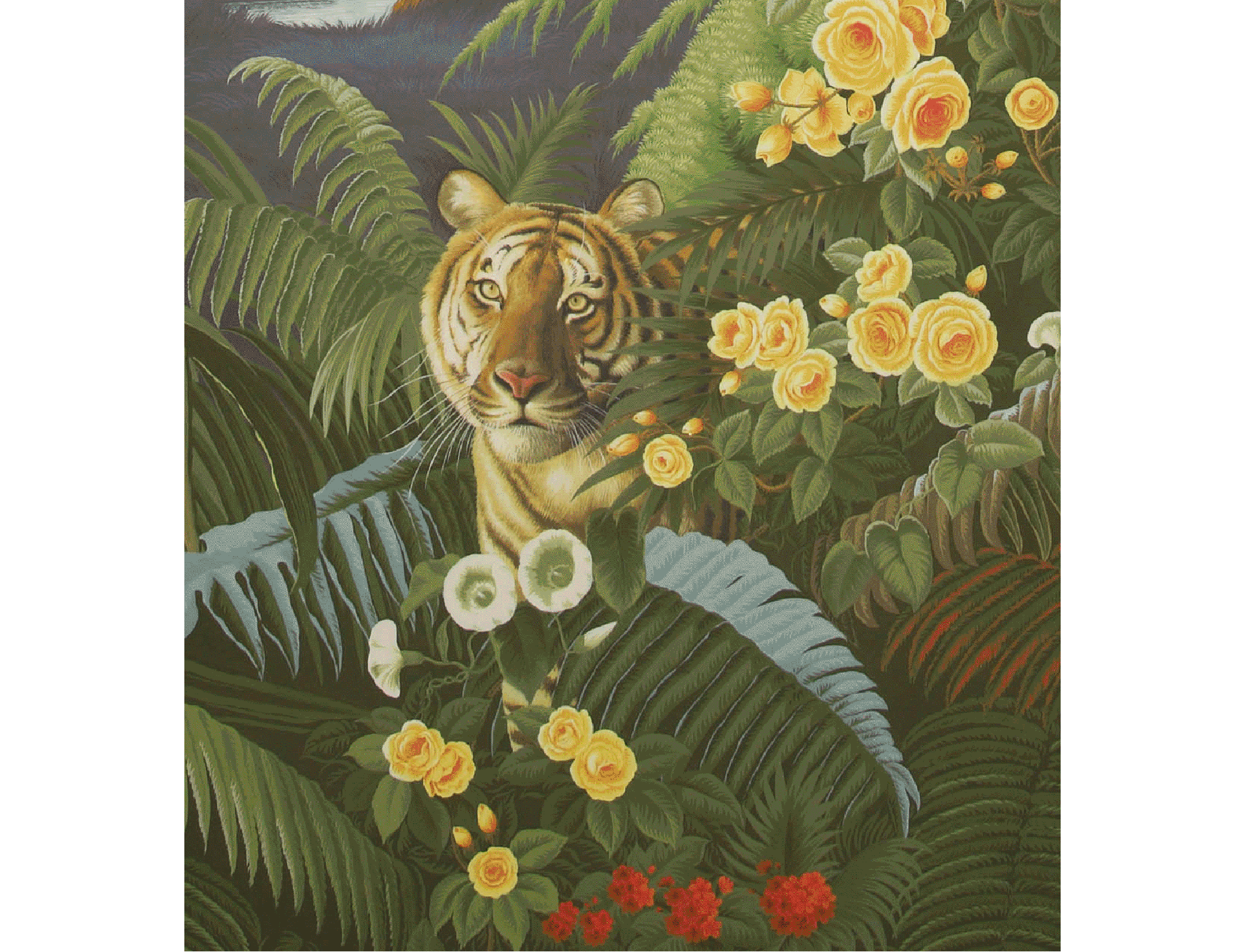 Bespoke cats were inserted within the teeming foliage of the 'L'Eden' design in the upstairs bar. 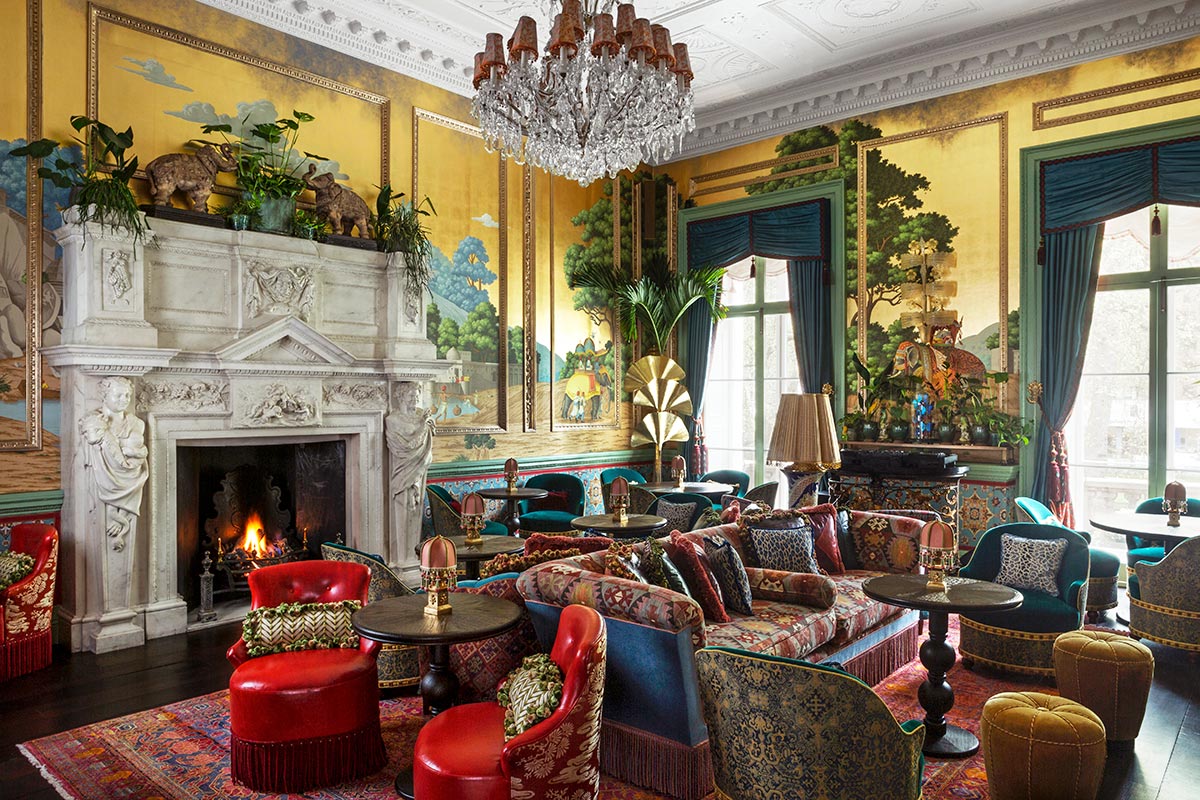 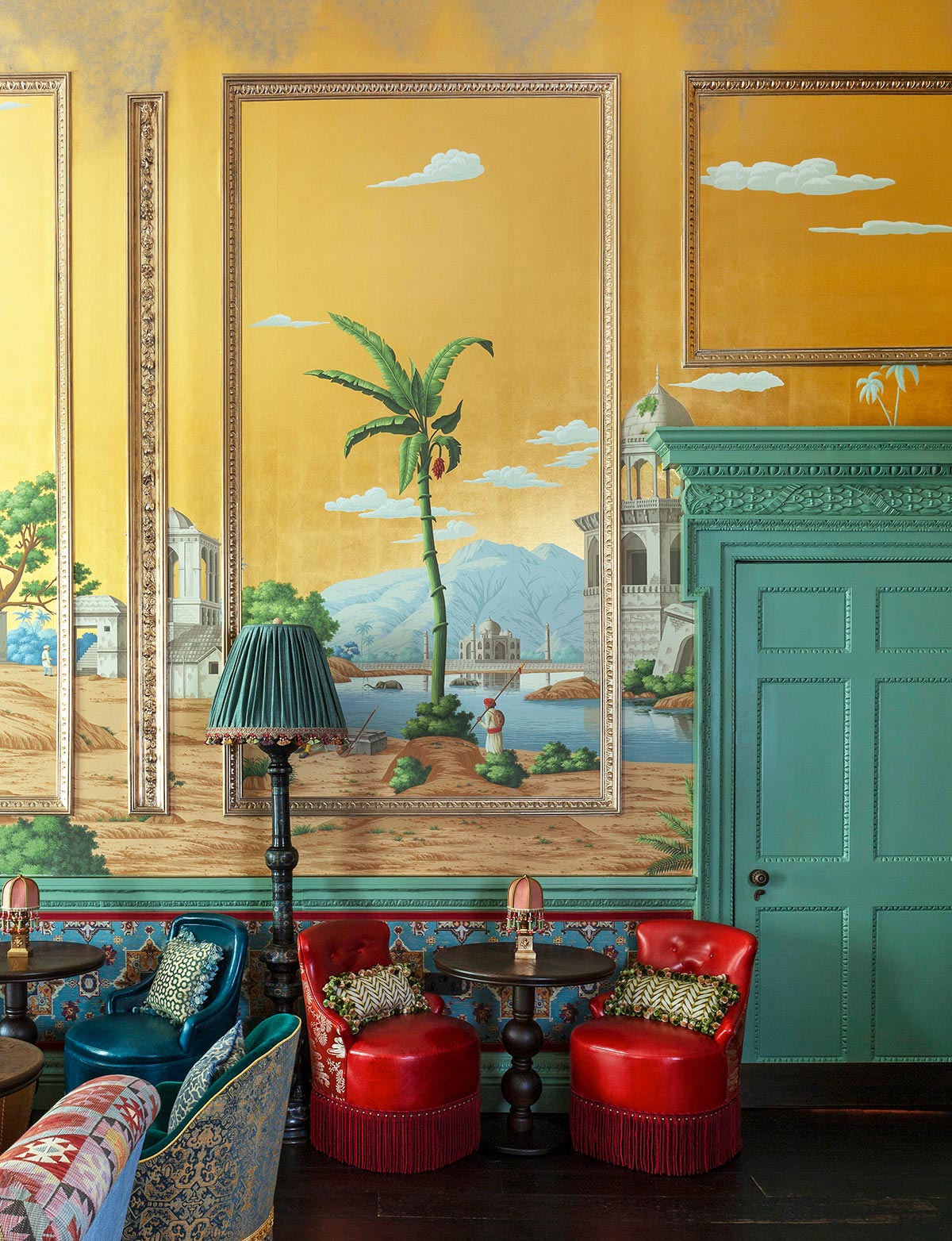 Within the first floor 'Elephant Room' bar and its adjoining salon, the scenic designs 'Early Views of India' and 'L'Eden' line the walls, painted onto Deep Rich Gold gilded paper with bespoke antiquing - transportive surroundings drenched in colour by day and illuminated by gold at night.
The nightclub downstairs, meanwhile, plays host to an exotic edition of de Gournay's Palms motif - the dense green fronds here filled with riotously feathered tropical birds and richly hued Heliconia flowers, through which hand painted Jaguars peer at a new generation of revellers. 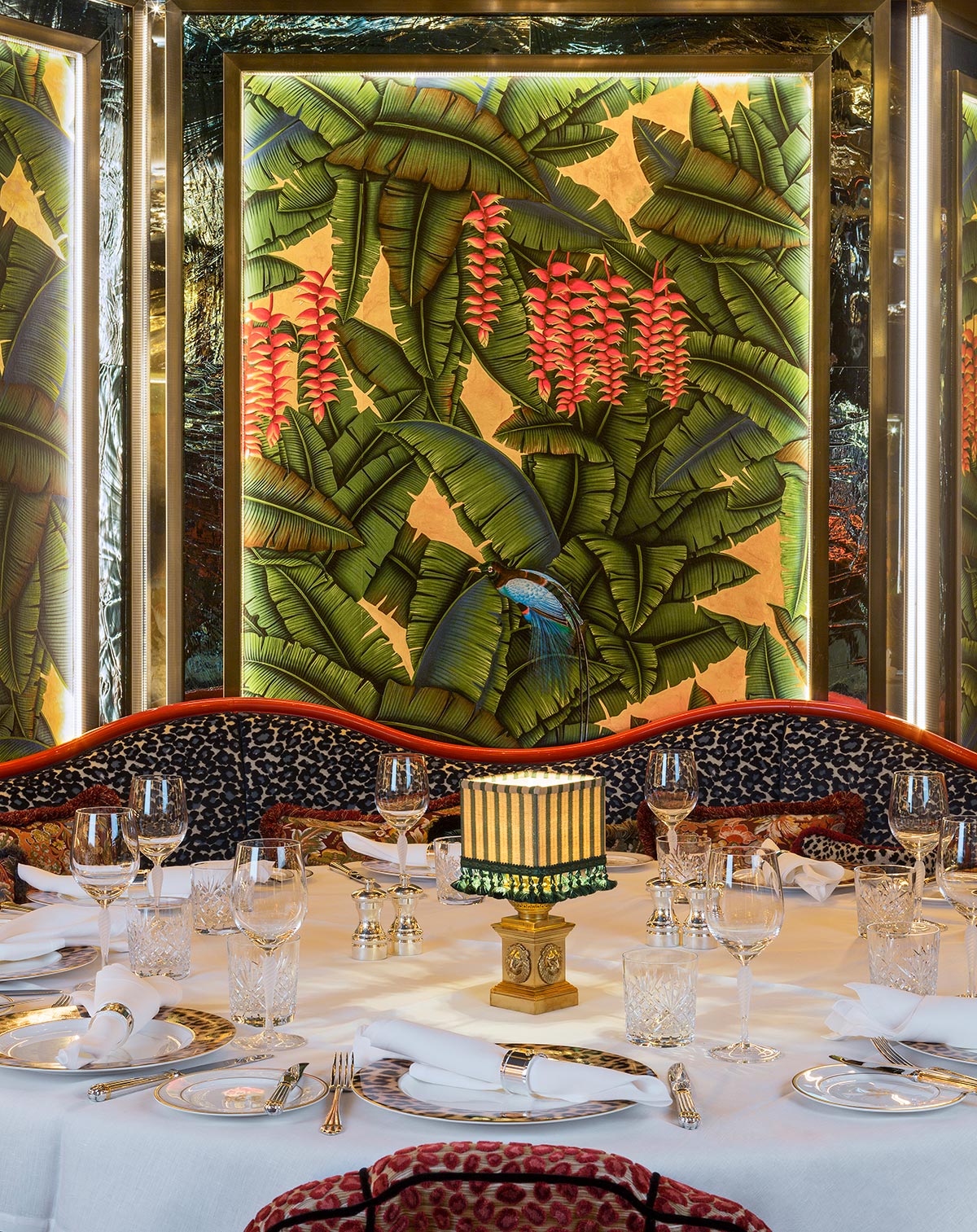 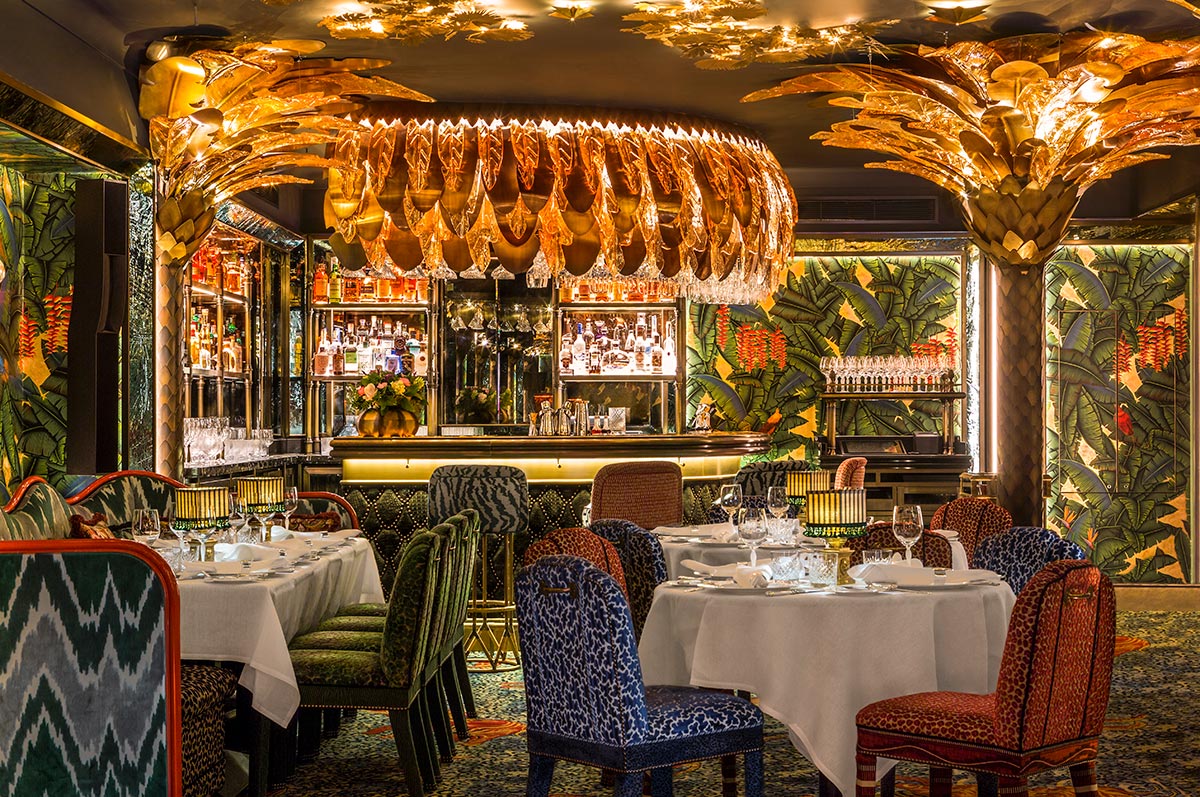 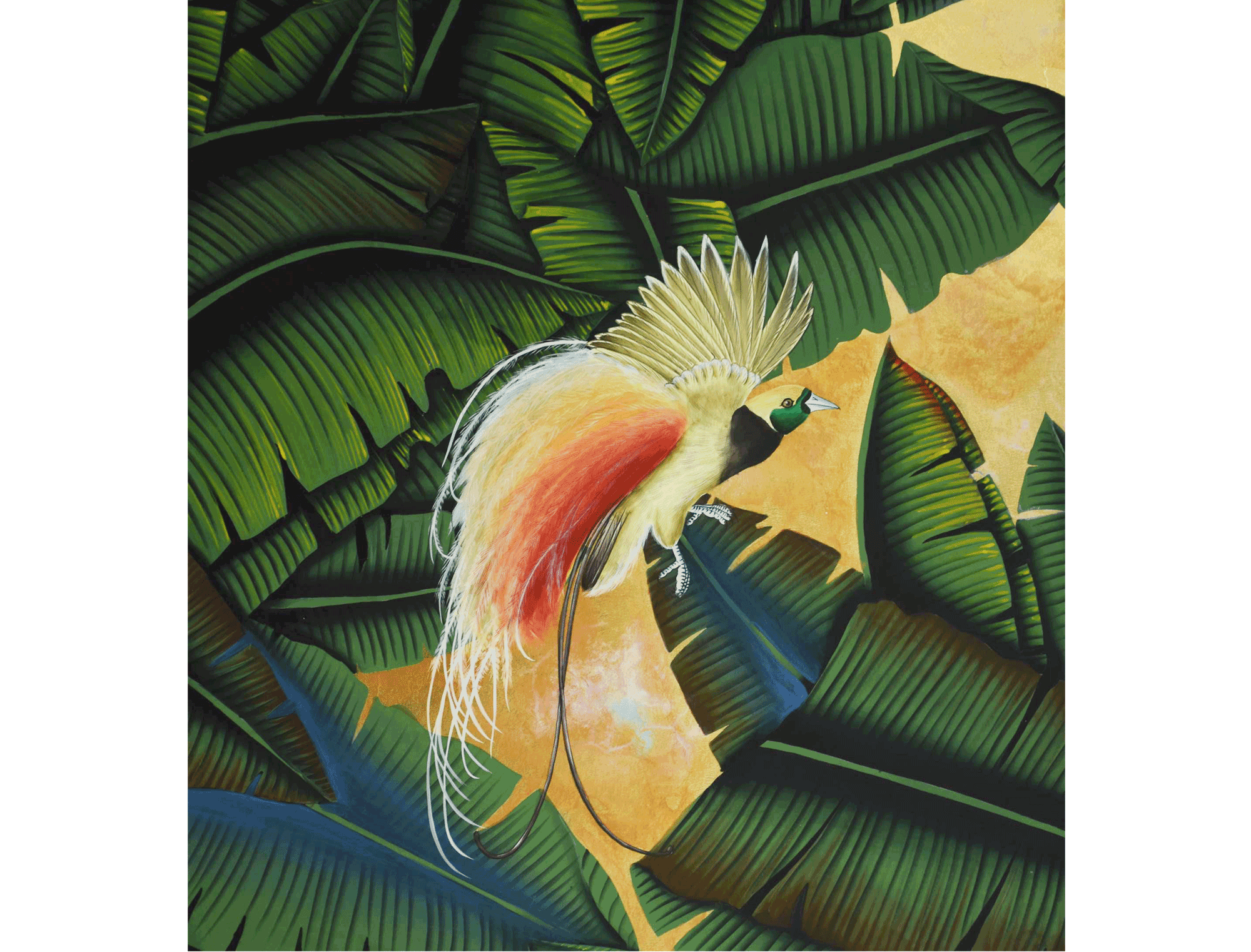 Brudnizki specified only the rarest Bird-of-Paradise specimens, from as far away as New Guinea, for hand painted depiction within the wallpaper. 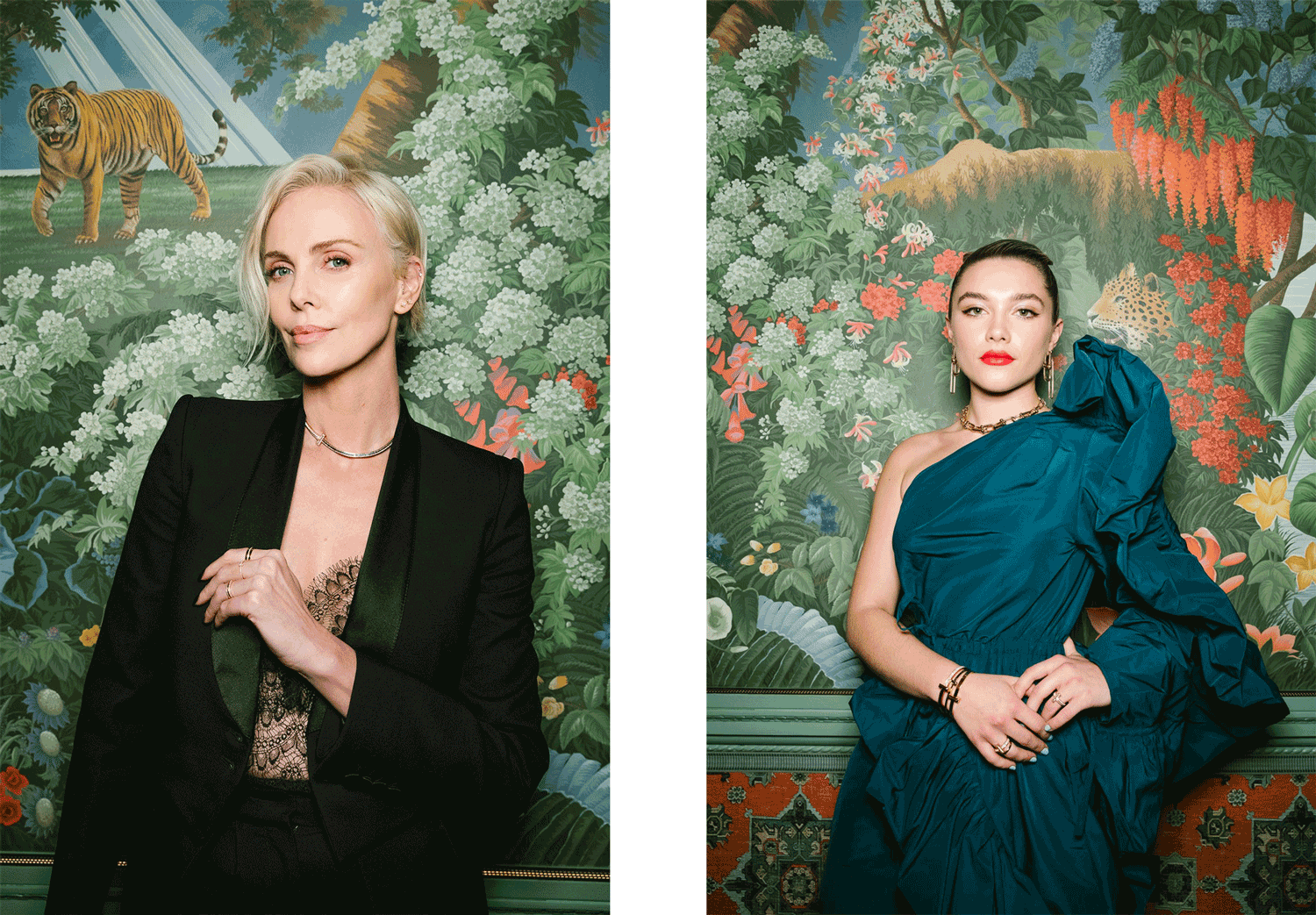 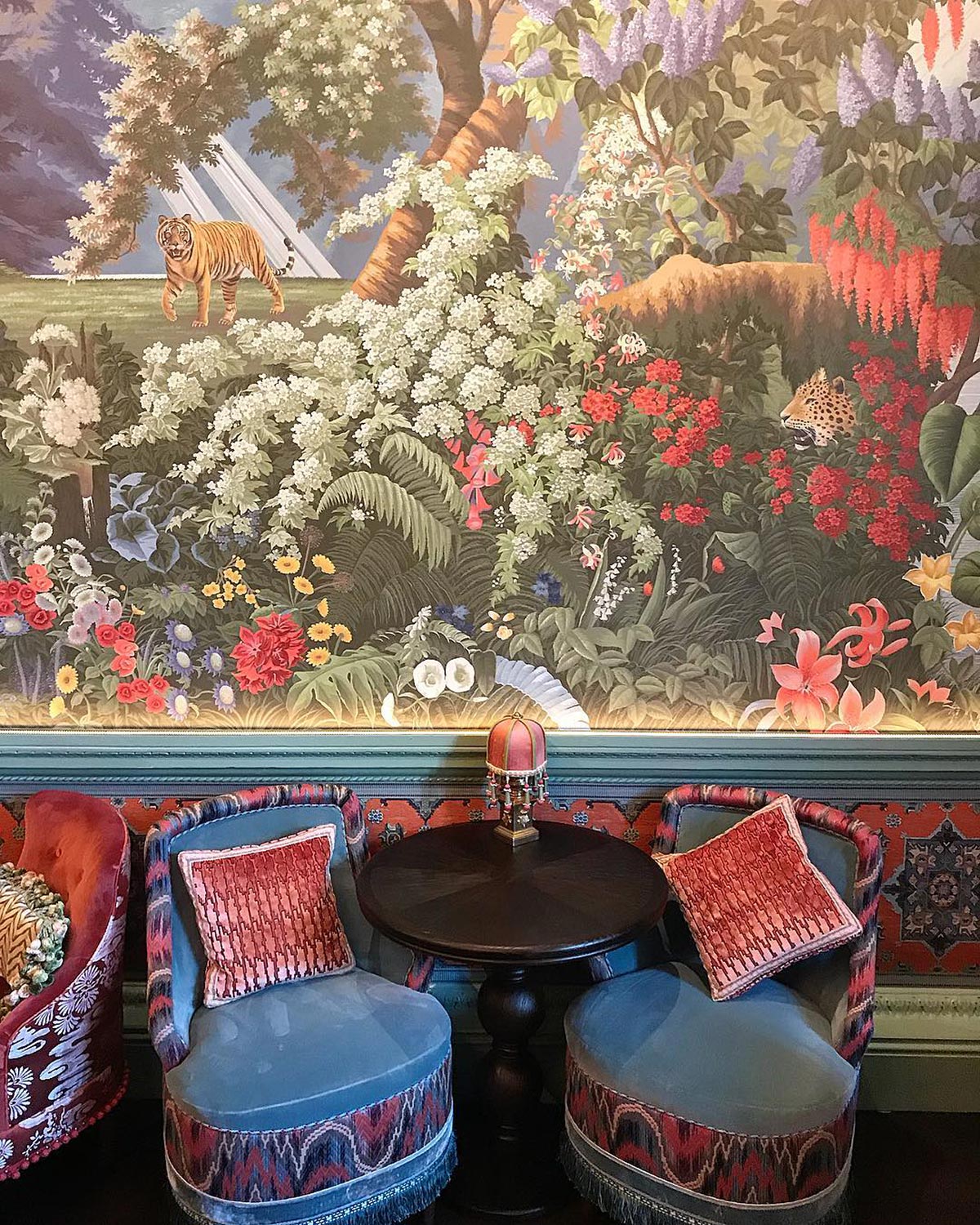 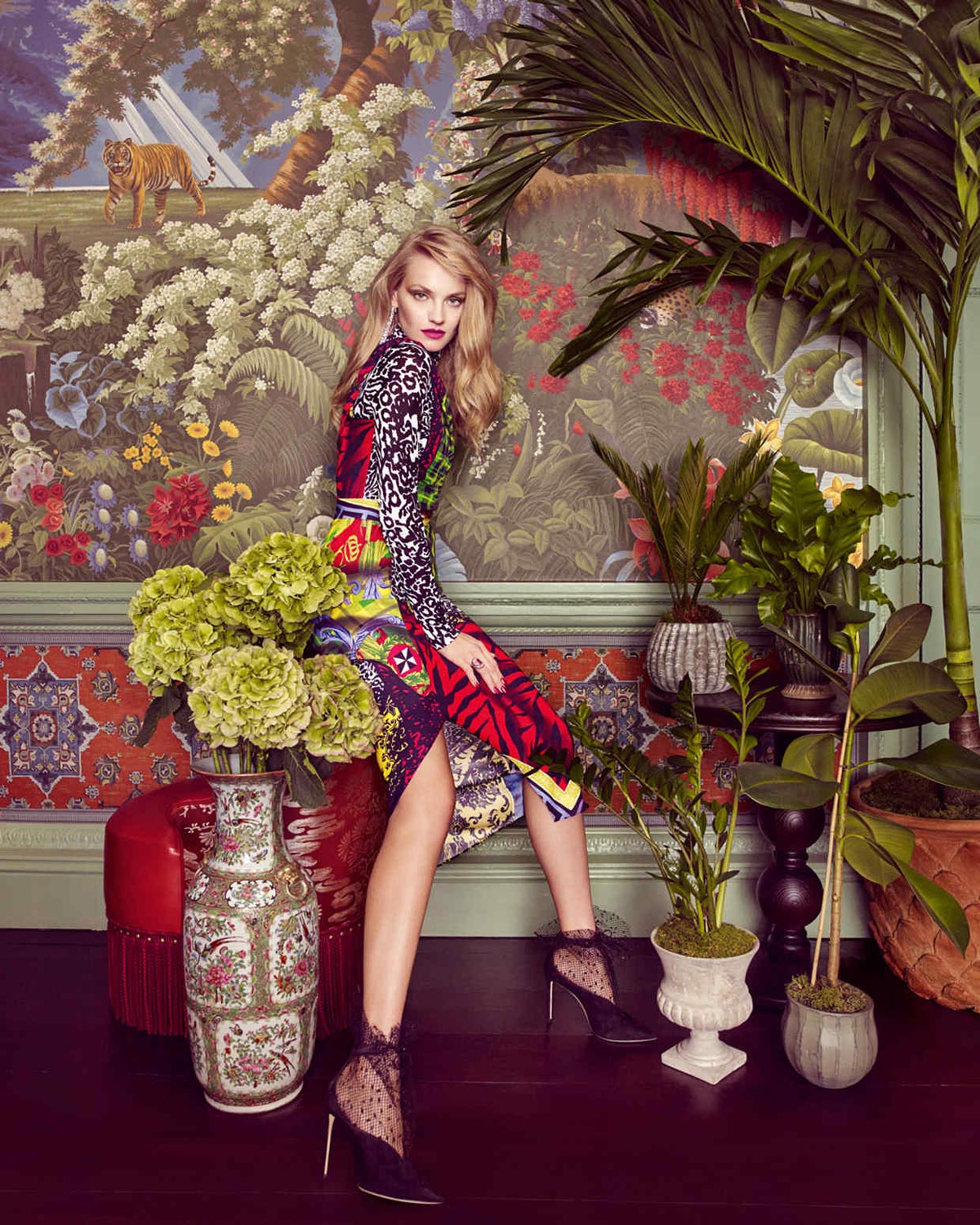